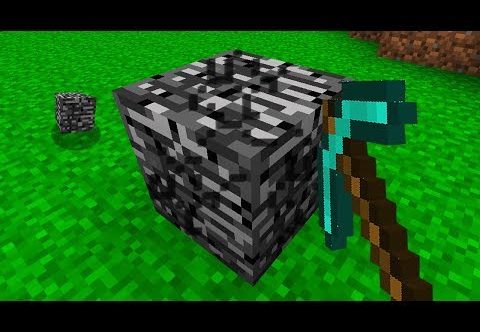 You know, there’s a question that from time to time I find myself wondering when it comes to Minecraft… Can you mine up bedrock in any way, shape or form in survival Minecraft… …even with modified enchantments and potion effects. Now, I know what you’re thinking. The answer seems like an obvious no. I mean, the block is literally identified as unbreakable within the game’s code. But to me just saying it’s not possible… …isn’t good enough. I need to know why it’s not possible.

I mean if we dig a little deeper here… …unbreakable in Minecraft just means the block has a hardness value of -1 and if you’ve been following my channel for long enough now… …you’d know that when most numbers in Minecraft exceed a predetermined maximum value, either the 32-bit or 64-bit integer limit… …things can go REALLY wrong. In today’s video, I want to dive deeper into uncovering the final answer of ”Can you mine up bedrock in Minecraft?”.

So let’s go ahead and take a look. So when I initially started working on this problem… …my first thought was to give myself the highest enchanted diamond pickaxe that I could get. In-game, in unmodified gameplay, the highest efficiency enchantment that you can put on a pickaxe is Efficiency 5. But using an NBT editor in Minecraft version 1.12, you can go all the way up to level 32,767. Using this pickaxe, rather than it taking 9.4 seconds to mine through obsidian like it would with an unenchanted diamond pickaxe… …it mines through it immediately.

From this point, I created a bedrock only world… …set up a command block tick counter to raise the scoreboard number on the right 20 times per second as long as this block of bedrock existed. That way, I could face my character down and use a computer macro to endlessly try and mine up this block of bedrock through an OVERNIGHT session. But after 765,000 ticks, or just over 10 hours later, I had no luck. The bedrock was still there. So… what’s next? Well, when I first got to work on this… …my idea was whenever you try to mine up a block, the total amount of time that you’ve spent trying to mine the block gets… …tracked and counts up as you continue mining the block. Since bedrock’s hardness value is ”-1”, my idea was if I could get this… …internal value to exceed the 32-bit integer limit of 2,147,483,647… …the number would roll over into the negatives and then begin counting down, like it’s done in the past… …towards zero, at which point the bedrock would either break immediately… …or it would break when it reaches ”’-1”. If you’ve seen my ”last day of a Minecraft world” video… …you’d know that Minecraft does not process negative numbers very well. But again, unfortunately… …my plans were busted before they even began! Hidden deep within Minecraft’s code lies a line of code like this.

All you need to know about it… …is that whenever you try to mine up a block in Minecraft… …the game checks to see what that block’s hardness value is before it even starts mining it. And if the hardness is a value of less than zero, which all classified unbreakable blocks are… …Minecraft just returns zero as your mining progress number, meaning you NEVER make any progress… …in mining up the block, NO MATTER WHAT. Now, I could easily end the video there. But I’m not going to just yet. I have one more question. If unbreakable blocks had their hardness value set to the 32-bit integer limit rather than -1… …how long would it take to mine up that block with my efficiency 32,767 diamond pickaxe?

Now… why am I asking that in the first place? Because before I was testing to see how quickly this pickaxe would reach the highest possible… …mining value and as it turns out, it would take about six… …seconds to mine up bedrock with this pickaxe, if that were the case. If I give myself Haste 127… …the highest haste value that I can get before the effect bugs out, bedrock would be mined up almost immediately. Keep that in mind. The value would go from zero to the 32-bit integer limit IMMEDIATELY! But then, because I take things way too far, I needed to know. Is the highest value that I can set hardness to… …really the 32-bit integer limit? And well… NO… …it’s actually THIS number, which if I tried to mine up bedrock with that value set instead… …with the same efficiency and haste effects active, instead of the bedrock being mined up almost immediately… …it would instead take over 753 QUINTILLION YEARS… YEAH.

So that answers that. You cannot mine up bedrock in unmodified survival Minecraft… …no matter what sort of modified enchantments you use. But I can certainly force it if I really want to. So yeah, that just about covers it for me for now. If you guys enjoyed this video… …please consider leaving a like on it, because it would really help out myself, the channel, and the video quite a lot. So I hope you all enjoyed. My name is AntVenom and I bid you all farewell. Thanks so much for watching.